Caring for a Husband with Alzheimer’s Disease 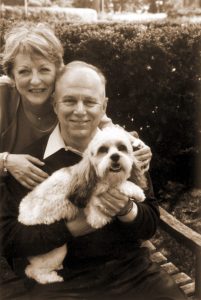 I met Lew Parker, my husband and soul mate, in my early 40s. Everyone said it was impossible to meet someone after age 40. I had a successful media consulting business. Lew had a money management firm. We told everyone we dated for 20 minutes and fell in love. We got married and talked of growing old together. We knew we were lucky to have met in mid‐life, but six years later, something wasn’t right. Lew’s brilliant mind got stuck without warning. His perfect navigation skills weren’t working. His precision in daily tasks became erratically impaired. We thought it was stress; it was Alzheimer’s. Life changed.

We agreed not to tell our friends and to just go along with life as if nothing was wrong. Very quickly I began to feel isolated. Our meal conversations, once lively and fun, were now non-existent, or about food and the dog. I could no longer talk to my husband, my best friend, as his mind had become compromised. We got invited out less and less. When friends talked about their husbands, I became quiet and couldn’t connect. Being extremely shy through my 20s, the pain, rejection and isolation reoccurred. The disease shadowed me every waking moment. His smile and life still touched my heart but there was emptiness in his eyes. I felt angry and alone. We weren’t going to grow old together.

It wasn’t a simple decision, but I decided to become Lew’s primary caregiver, even if it meant giving up my business. It was tough; as I never imagined the sickness part of the marriage vows might be Alzheimer’s. I wanted to be everything I could be to provide dignity and respect. I cherished each day and the moments of happiness. But with Alzheimer’s, there is no getting better. Alzheimer’s is fluid and messy without any boundaries. Routine and predictability become critical to the caregiver. Protecting those things was like having imaginary yellow tape to set up some soft boundaries for me.

I found a new support environment to help me navigate the stormy waters of the horrific disease. Melanie, a friend and ideal caregiver, devised a unique community within my church. Edie, an 80-year‐old retired doctor, volunteered to drive Lew to appointments. Mary Lou and Jim, a retired couple, took Lew and Wentworth for walks. Mary Lou made oatmeal raisin cookies, Lew’s favorite. I soon realized the two dozen cookies were eaten in one sitting during the weekly visit. Laurie, a businesswoman, called on the spur of the moment to take Lew on errands or a drive him around. Chris, a brilliant MD, brought coffee every Saturday morning providing caring intellectual stimulation for Lew. I had paid caregivers but this special church community became my extended family.

Wentworth, our Cockapoo, is our small dog with a big name and personality. Our Alzheimer’s family consisted of Lew, Wentworth and me. We were all in it together. We got Wentworth the first year we faced Lew’s illness. Lew always wanted a dog. I didn’t. I wanted a husband. I still have the dog.

Everyone knew Wentworth. Lew and Wentworth were inseparable. Wentworth never judged Lew. He eagerly waited for Lew or a turkey sandwich or his favorite vanilla ice cream. He was always top dog. He was constant in his love and didn’t sense he was losing anything. And Wentworth gave us something to always talk about and laugh about through his mischievously entertaining antics. I’ll never forget the day Lew remembered me, but forgot who Wentworth was.

Routine and predictability were gained through my Sip N Stitch group consisting of my dear girlfriends. We met Thursday nights at our place. My friends brought needlepoint to stitch. Lew brought Wentworth and his briefcase. As with many groups, each of us had our own spot to sit. Lew’s was on the left side of the sofa. Wentworth sat next to him or in his lap. He set his briefcase on the sofa and would often open it and look at photos he had clipped together, pull out his yellow pad to write with his red pen or open his calendar. My girlfriends never questioned Lew and Wentworth’s inclusion in the group.

We drank wine, talked and laughed a lot. Lew’s laugh was infectious. It was clear to my friends there were days when he knew who each person was and other days when they were strangers to him. He recognized me to the end. Needlepoint was an element in my life that was predictable. Everything about Alzheimer’s is rambling and unplanned. Needlepoint is finite. I put a thread into canvas and a beautiful colored stitch appeared.

When I discovered the Alzheimer’s Association, I found they were having a walk so Lew and I joined the committee that gave us a project to work on. The last walk we did together in 2004 was bittersweet as Lew’s internist, his long time friend, Wentworth and I walked with our team, knowing that Lew’s disease had reached a new stage of severity. I’ll never forget Lew’s inspiring struggle to finish the walk, even though he probably didn’t even know what he was doing.

Eventually I joined a Spouse’s Support group. It was my weekly time of authentic sharing, listening, crying, and support. We were an angry, depressed, overwhelmed, honest, vulnerable group. We talked in sound bites. Our ages ranged from me in my early 50s to 80+, all wives of husbands in various stages of Alzheimer’s. The Spouses Support group was the real community in a world that had become surreal.

Lew and I lived in Old Greenwich, a quaint neighborhood with local restaurants and small shops. Shop owners knew Lew and Wentworth who were always walking around town. After he became lost a couple of times, I went to shops he frequented giving them my phone number so they could call if Lew came in confused or lost. Shop owners were wonderfully helpful.

We had always enjoyed going out to dinner. However, Alzheimer’s created personality issues in a restaurant that could be embarrassing. Common with the disease is loss of taste, smell and excessive drinking. Lew liked his wine. After two glasses, he got angry and agitated, creating a scene. First, we stopped going out. Then I discovered non‐alcoholic wine and thought I would see if Lew could tell the difference. It was successful. One day while having lunch at an Old Greenwich restaurant, I talked to the manager and she arranged for non-_‐alcoholic wine and they graciously went out of their way to make us feel comfortable. Feeling like a normal couple, we enjoyed social evenings again.

The year before Lew passed away, we went to Italy. We celebrated our tenth anniversary at the Homestead in Greenwich where we were married. I tied Lew’s tie, dressed him in his starched white shirt and blue suit. We held hands as we walked in. Lew passed away seven months later at the age of 61 from early onset Alzheimer’s. We had 12 years together. Sip N Stitch is still on Thursday nights. Wentworth and I still go for ice cream but have changed to low fat.

We're looking forward to speaking with you.

Click to call 203.531.5500 or complete the contact form to Schedule a Tour of our Assisted Living Community with Executive Director, Maria Scaros.

© Copyright 2022 The Greens at Greenwich. All Rights Reserved.